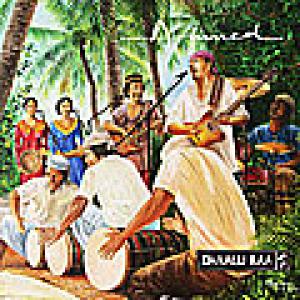 Yours truly mostly knows the Maldives as a tropical holiday paradise and because of the islands' connection with the almost mythical Coco de Mer from the Seychelles (although the double coconut only grows in the Seychelles, the nuts often end up in the ocean, making them wash up in the Maldives, where they were used as a medium of exchange), but musically the islands were unknown territory. Ahmed Nasheed began his musical career with Zero Degree Atoll, the most popular band in the Maldives, but with 'Dhaalu Raa' (Dhaalu is one of the atolls that make up the Maldives) now delivers his solo debut. The music of Ahmed is a mix of Western rock and acoustic guitar music supported by the rhythm of traditional bodu beru drums (also pictured on the cover of the album) with lyrics in Maldivian in which Ahmed broaches subjects like the corruption in his country ('Bakari'), globalization ('Dhoni'), road safety ('Magumathi') and even Princess Diana ('Dhiyaanaage Huvafen').