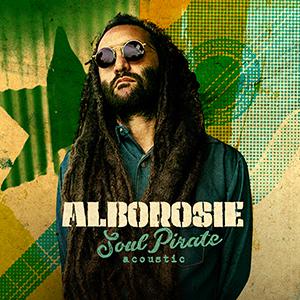 In 2018 Alboroseie long player debut 'Soul Pirate' will be exactly 10 years old, and to mark the occasion the Italo-Jamaican now selected a number of the biggest hits from that album ('Herbalist', 'Kingston Town', 'Police'...) and rerecorded them acoustically for 'Soul Pirate Acoustic' (an album that might just as well have been called 'Alborosie Unplugged', but that name has undoubtedly already been trademarked). The only two exceptions in the track list - song that were not on 'Soul Pirate' - are 'Kingdom Of Zion' (from 'Escape From Babylon To The Kingdom Of Zion') and the Chuck Berry/Peter Tosh cover 'Johnny B. Goode', one of our favorites on this album. A special mention should certainly go to Lorenzo Fontana, whose flute melodies enliven songs like 'Rastafari Anthem' and 'Black Woman'. 'Soul Pirate Acoustic' comes accompanied by a DVD containing footage of the recording process and an interview with Alborosie. Excellent reinterpretation, in line with other acoustic albums of recent years.