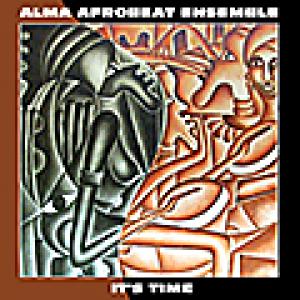 With 'It's Time', the title of their third album, Alma Afrobeat Ensemble indicate the time for change has come; something they also experienced as a band, as for this album, for the first time the Barcelonans joined forces with Nigerian vocalist Joe 'Olawale' Psalmist. The album is neatly divided into two parts: the first tracks are all new songs, but for the last 5 tracks the band invited a number of befriended artists to give some of their songs a fresh makeover. From these remixes we were most taken with 'Siempre Presente', a hip-hop remix of 'New School' by DJ Farmo (also featuring rapper Tauro of Black Baudelaire), and 'Lost In Dub', the dubby remix of 'Lost' by Los Kalakos. As was the case with 'Life No Get Dublicate', for which Lemi Ghariokwu provide the cover illustration, for 'It's Time' Alma Afrobeat Ensemble once again invited a graphic designer/visual artist. This time the band opted for an artwork by Gambian artist Yusupha Gai, whose style best can be described as afro-cubism.