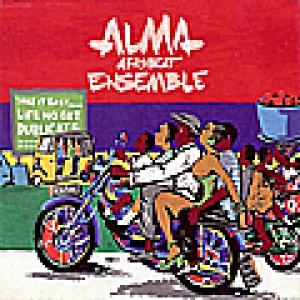 Alma Afrobeat Ensemble is the brainchild of Aaron Feder a guitarist from Chicago. The band was founded back in 2003 but got a complete makeover after Aaron moved to Barcelona in 2006. A first album, 'Toubab Soul', appeared in 2010, immediately followed by a remixed version, 'Toubab Resouled', and now the band presents us with this sequel 'Life No Get Dublicate'. Feder does not try to hide his admiration for afrobeat pioneer Fela Kuti: along with their manager Javi Zarco aka Pincha Extra Z and DJ Floro, Alma Afrobeat Ensemble started to organize Felabration concerts in Barcelona a few years ago and for the cover illustration of 'Life No Get Dublicate' the band even collaborated with Lemi Ghariokwu, the Nigerian graphic designer who was responsible for many a cover design of Fela's albums. For the vocal part of their music Alma Afrobeat Ensemble can count on the talents of Argentinian singer and saxophone player Lucila Ciocoletto and Senegalese vocalist Babacar 'Baba' Gaye, allowing the band to alternate between English, French, Spanish and Wolof, providing their afrobeat sound with its own unique vibe. The global afrobeat family continues to expand!