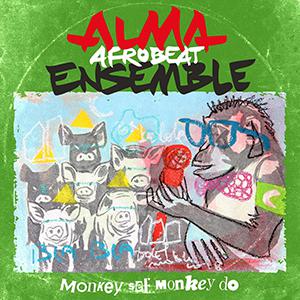 With 'Monkey See, Monkey Do', Barcelonese afrobeat formation Alma Afrobeat Ensemble is already presenting its fourth long player. The title of the album refers to the English expression meaning people start imitating things or adopting behavior without any knowledge of the facts or being disturbed by the possible consequences of their actions. In the track list, classic afrobeat tracks like opener 'Remember', about the lies and false promises politicians keep feeding us, the steaming 'Stealin', in which they denounce scammers who only use religion to enrich themselves, or the more than eight minute long 'Eshu', but this time also experiments with instruments that you wouldn't immediately associate with afrobeat, like the banjo and the Dobro (a guitar brand focusing on building resonator guitars, a type of acoustic guitar developed by John Dopyera where the sound is amplified by one or more metal cones, the so-called resonators), among others, to be heard in title track 'Monkey See...' or 'Copy Copy'. They also invited guests like producer Ian Toole and guitarist/vocalist Ray Lugo (both members of New York based Kokolo Afrobeat Orchestra, but we also remembered the latter from his work with The Boogaloo Destroyers), Barcelonese Jack-of-all-trades duo ZA! ('Zafro') and Italian DJ Quiet, to remix some of the new songs. With his 'Stealin' The Club', a dance remix of the aforementioned 'Stealin', the latter provides some afrobeats on 'Monkey See, Monkey Do', and with '...Monkey Do' Toole and Lugo created a short funky version of title track 'Monkey See...'. For the cover illustration of the album, the band once again turned to a painter, this time Congolese artist Dolet Malalu. We continue to enjoy the sounds of this Spanish afrobeat band that is not afraid to experiment but at the same time always shows the necessary respect for the foundations of the genre!