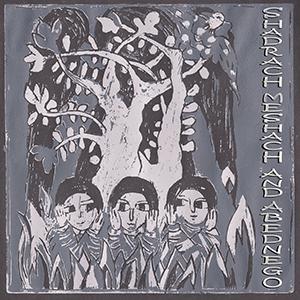 Three years after 'One By One', their last long-player on the Steppas label of Ben Alpha (son of John Sprosen), UK-dub pioneers Alpha & Omega return with 'Shadrach, Meshach And Abednego'. Once again, the duo opted for the showcase format presenting five new vocal cuts and as many dubs. For the vocal part, familiar faces like Ras Tinny and Nai-Jah return, this time supplemented with UK veteran Danny Red, Brummie vocalist Joseph Lalibela, who with opener 'Steppin In The Fyah' signs for the album's theme song (Shadrach, Meshach and Abednego were three Jewish youths of noble descent who, according to the Book of Daniel, during the Babylonian exile refused to worship the golden statue King Nebuchadnezzar had erected and as punishment were subsequently thrown into a burning fire, where they were protected from the fire by an angel), and the somewhat mysterious Wellette Seyon, a singer who, just like Alpha & Omega's John Sprosen, prefers to stay out of the limelight, and with the conjuring 'Real Eyes Realize', immediately our favorite from the track list, adds a feminine touch. The only song title that might require some explanation is 'Maisha' featuring French-Nigerian Nai-Jah on vocals. 'Maisha' is Swahili for "life" and the whole song is conceived as an ode to life, nature and our blue planet. More than excellent addition to Alpha & Omega's impressive catalogue!