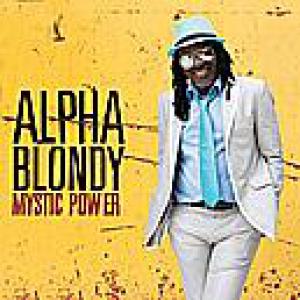 'Mystic Power' has a somewhat difficult start as the first two tracks on this new album of African reggae hero Alpha Blondy ('Hope', an awful duet with Beenie Man and 'My American Dream' that tells of the traumatic end of Alpha's stay in the United States), are enough to make one squirm. Fortunately Alpha quickly recovers. 'J'ai Tué Le Commissaire' is a French adaptation of Bob Marley's 'I Shot The Sheriff' and 'Le Métèque' is Alpha's interpretation of the eponymous chanson by Georges Moustaki. For the production of 'Mystic Power' Blondy once again called on his old pal Dennis Bovell, who was already responsible for producing some of Alpha's earlier albums. One of the most important tracks on 'Mystic Power' is 'Reconciliation', a song on the peace process in Ivory Coast, but also the reconciliation with Alpha's "frenemy" Tiken Jah Fakoly. 'Pardon' (in which Alpha apologizes to his countrymen for failing them as a peace mediator) and 'Danger Ivoirité' (about the dangers of advancing nationalism in his homeland Ivory Coast), also have the political situation in Ivory Coast as central theme. In 2011 Alpha Blondy was invited to play at the Azalay festival in South Moroccan Ouarzazate, inspiring the eponymous 'Ouarzazate'. Classic Alpha Blondy is finally 'France À Fric', in which the West gets a serious dressing-down for the pillaging of the African continent. Those who want to know what the "mystic power" in the album title refers to are best to listen to 'Woman', Alpha's ode to women.