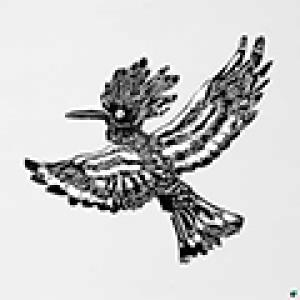 For '3rd Kingdom', the second long player on his Steppas Records label, Alpha Steppa didn't choose July 7th as a release date at random, as this year the label celebrates its seventh anniversary. The album is a kind of travelogue nicely listing Ben has collaborated with in recent years (Tenor Youthman - Russia, Sistah Awa - Italy/Senegal, Nai-Jah - France, Double Tiger - United States, Cologne - Jamaica, High Public Sound - Brazil, Don Fe - Ireland/United Kingdom/Spain, Ras Tinny - Ireland/UK/Surinam, Jonah Dan - United Kingdom and Ras Divarius - France) and the experiences he gained doing so. On '3rd Kingdom' twelve quite different tracks, but, as Steppa summarizes: "We call it Conscious sound system music, which basically means that when we are producing a song or working with an artist, we like to have some kind of message, it's as much about the message as it is the music.". The bird on the cover of '3rd Kingdom', an African hop, is the work of Ben's mother Eve. Alpha Steppa chose the design after he spotted a hop while working on the recordings for this album; the hop being a migratory bird, also makes it the perfect symbol in the light of global migration issues. Asked about the title of this new album, Ben commented: "We have the physical kingdom, the metaphysical kingdom, and then there's the 3rd kingdom, the stateless state; that which cannot truly be named or spoken of. I see music as the bridge to this place, between the known, the unknown and the unknowable. It's just my own personal philosophy. I call it newborn knowledge, as it's not really about knowledge but that which came before: awareness.". All you still need are our favorites from the track list, being opener and title track '3rd Kingdom' feat. Tenor Youthman (featuring some great trombone work by Dave 'King David' Andrews), the solid stepper 'Mek We March' feat. Cologne, and finally 'Heart Made Of Stone', a successful reworking of the Viceroys' classic by Sistah Awa. Get ready to open that portal to the '3rd Kingdom'!