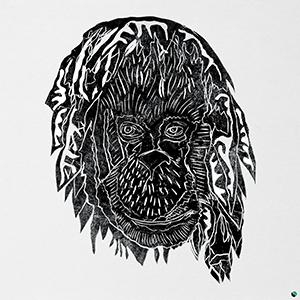 With his new album, 'Raise The Ark', Alpha Steppa is also celebrating the tenth anniversary of his Steppas Records label.

As far as the title of the album goes, Ben comments: "'Raise The Ark' is a call to action, to help preserve life on this planet. Whether that be through self-enquiry, self-sufficiency, permaculture, protest, civil disobedience, activism or whichever means feels most effective. Each conscious decision grand or small is another plank towards the hull of the Ark".

Musically speaking, Alpha Steppa continues to evolve, and on 'Raise The Ark', even more than on its predecessors, infuses his avant-garde dub sound with influences from genres like hip-hop/trap ('Supreme Dream' featuring Ras Tinny & Sista Awa), folk and bass music.

The track list counts 12 vocal cuts and 10 instrumentals/dubs, for which Ben once again collaborated with a kaleidoscope of vocalists from all over Europe and beyond, including Tenor Youthman, Sista Awa (who, with no less than three contributions, featuring most prominently in the track list, and 'Whiplash Crack', a song in the same vein as the well-known classic 'Is It Because I'm Black' and thus perfectly suited to serve as an anthem for the Black Lives Matter movement, as the absolute highlight), Ras Tinny and Nai-Jah (featured in 'Black Rain' together with Ras Tinny, and solo in 'Omo Kibish', the name of the archaeological site in Ethiopia where, to date, the oldest skeletal remains of a homo sapiens were excavated; a track also prominently featuring the violin sounds of Japanese violinist Oryo), all of whom already collaborated on 2017's '3rd Kingdom', but also new faces like Pupa Jim (featuring in 'Dear Friend', Ben's first collaboration with the voice of Stand High Patrol, already a fixture in Alpha Steppa's live sets for quite some time and now finally immortalized on record), Irish singer and selector Eva Keys, who, just like family friend Cian Finn ('Show Me The Way', the intro of the album is an interpretation of 'Nuttamun Town', an old folk song that was revived by American folk singer Jean Ritchie in the nineteen fifties) provides a touch of folk in 'Fever', and finally Italian-Ghanaian Block Mameli ('My People'), whose name might not ring a bell yet.

Still not convinced? Then there's still Ben Alpha's ethos, as for this album he established a partnership with the One Tree Planted organization in Ethiopia, where a tree will be planted per sold copy of 'Raise The Ark'!