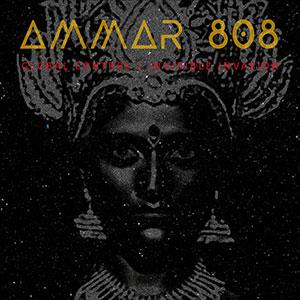 After 'Maghreb United', Belgo-Tunisian producer Sofyann Ben Youssef aka AMMAR 808, decided to head in a totally different direction, and for successor 'Global Control/Invisible Invasion' travelled to Tamil Nadu in India, where he collaborated with local musicians and vocalists at Paul Jacobs' studio.

Ben Youssef: "When I was 20, I went to Delhi and studied for months. I learned sitar and tabla and did a lot of recording, and I began to absorb the culture, to learn. Hinduism has a pantheon of gods, and it shows a different culture of freedom. After 2011 and the start of the Arab Spring in Tunisia, my homeland, I've been wondering more and more about freedom and my own identity.".

In 2019 he finally returned to Chennai, the capital of Tamil Nadu: "I spent 24 days there; I found incredible singers and musicians through a man called Paul Jacobs. He owns the studio where I worked, and he's a musician and producer himself; he knows a lot of people and stories.".

In 'Invisible Invasion', the second part of the album title, you can undoubtedly read a reference to the prevailing COVID-19 pandemic, but that wasn't really AMMAR 808's intention: "To me, in the Hindu belief system, the invisible invasion happens in the brain, the soul. We're invaded without ever seeing it externally, and this system decrees our fate. And usually we embrace it, instead of fighting against it. Then COVID-19 happened, of course, but this name precedes it. This year just emphasizes how vulnerable we are.".

The virus created a dystopian reality, which occasionally show a striking resemblance with parts of Hindu mythology, or as Sofyann puts it: "...some of the stories are like a science-fiction movie, filled with tales of global wars, gods with flying machines and divine weapons and extinction level events; a subtle and more mysterious history of mankind.".

While on 'Maghreb United' still offered a mesmerizing mix of Maghrebean rhythms with the deep beats of AMMAR 808's trademark Roland TR-808 drum computer, this time he made his modern electronics clash with the ancient Carnatic musical traditions from the south of India, of course with the emphasis on the percussive: "Rhythms are like earth and fire, but with India you have that time calculation. I knew those rhythms; they were like a second nature to me. They're very mathematical and architectural. Sometimes the percussion idea is long, with the bass in second place; at other times the rhythm cycle can be very short, abrupt. It has a very different quality, a powerful aspect. If you have three percussion players together in a room, they can sound like 100. One of the differences between this and the last album is that there's more melody here, and more rhythm in a sense. None of the quarter tones and Arabic scales. The sound here is much brighter.".

That all sounds very progressive, but many of the tracks on 'Global Control/Invisible Invasion' have their roots in Hindu mythology. 'Ey Paavi', for example, which tells the story of the battle between Bhima and Duryodhana, taken from the 'Mahabharata' (a very extensive religious and philosophical epic, which, together with the 'Ramayana', forms an important cultural cornerstone of Hinduism), 'Mahaganapatim', another name for the Hindu god Ganesha, and songs like 'Marivere Gati' and 'Pahi Jagajjani' have a long tradition in South Indian history.

The result is another conjuring trance album, or as Glitterbeat Records puts it: "Futurist syncopations with hypnotic, timeless narratives. Expansive electronics fused with on location recordings. Kaleidoscopic and exhilarating.