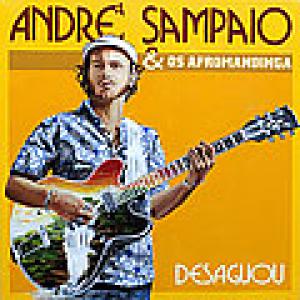 Reggae fanatics will undoubtedly know André Sampaio as a guitarist and songwriter for Ponte De Equilibrio, Brazil's most famous reggae group. For 'Desaguou', Sampaio went down a very different musical path: Malian music and more in particular the Mandingo guitar (thanks to some befriended musicians of Terrakota). In Brazil the term "mandingo" has a double meaning: on the one hand, the term denotes the people and the associated Empire in West-Africa, but in apart from that it also refers to an ethnic minority of Muslims of African descent and in capoeira it indicates the qualities of a good dancer/fighter. Sampaio may refer mostly to Malian music on 'Desaguou' (for title track 'Desaguou' he invited Vieux Farka Touré and 'Ecos De Niafunke ' is an clear ode to Vieux' father Ali Farka Touré), but the delicious afrobeat of 'Zumbi' proves the album is broader than that. 'Desaguou' (a Portuguese term referring to the flow of a river) is not an African album, nor a Brazilian one for that matter, but an extremely successful hybrid with influences from both continents!