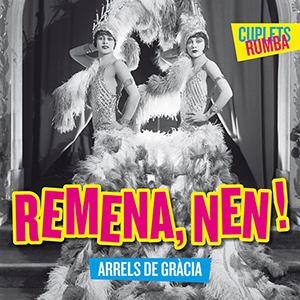 The songs on 'Remena, Nen!' (loosely translated from Catalan: "dance child!") go back up to three or four generations and have become Catalan evergreens. In their original form, they first appeared in the 1920s, immortalized by artists such as Pilar Alonso and Mercè Serós, and were revived in 1970 on Guillermo Motta's album 'Remena Nena'. Arrels De Gracià (Catalan for "roots in Gracià", referring to the Gracià district in Barcelona, which played an important role in the development of the rumba catalana), a band around vocalist/guitarist Jonatan Ximenis, bass player Tony Reyes, Núria Garcia on violin, Laura Santos, Chiqui Amaya and Fanny Hebrard on backing vocals and Jack Chakatanga on guitar and percussion, now re-recorded the evergreen album and, with Motta's permission, gave the songs a rumba catalana makeover. Interesting piece of Catalan music history given an infectious new vibe!