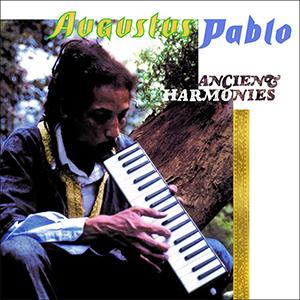 In that period, the digital revolution in reggae was rampant, forcing Pablo to adapt his original rockers sound to the changing spirit of the times. Recorded in studios like Channel One, Tuff Gong, Dynamic, HC & F and Creative Sound by sound engineers like Scientist, Soldgie, Philip Smart and Steven Stanley, those digital Pablo albums turned out to be big hits in Europe and even more so in Japan. The title of 'Rockers Come East', the second album in the series and originally released in 1987, was therefore meant as a small thank you for his successful passage on Japan Splash the year before.

Strangely enough, the compilation is not presented in chronological order, so 'Ancient Harmonies' opens with 'Blowing With The Wind', dating from 1990, making it the last album of the four. On that long-player Pablo for the first time incorporated nyahbinghi percussion, and the combination with the hardcore UK steppers sound immediately made it one of the master's all-time classics. Next is the aforementioned 'Rockers Come East' from 1987, which next to a UK Steppers tune like 'Sun Ray Dub' and the dubby 'Zion Seals Dub', also featured 'Pablo Meets P Smart In L.I.', 'Dubbing The Oppressors' and title track 'Rockers Come East', reworkings of 'Call Me', 'Raggamuffin Year' and 'Love You Tonight' (originally the Soulful Music riddim by Studio One band Invaders), tracks from Junior Delgado's 'Raggamuffin Year' album released that same year. 'One Step Dub' is a dub version of Delgado's 1988 'One Step More' album, and on 1986's 'Rising Sun', among others, 'African Frontline', a melodica version of Heptones classic 'Party Time', and 'The Day Before The Riot', for which Pablo drew inspiration from the protests against the rising oil prices that set Kingston on fire in 1985.

For those who do not yet own the aforementioned albums, this compilation offers a nice cross-section of this period of musical renewal in Augustus Pablo's career, but it doesn't add much.