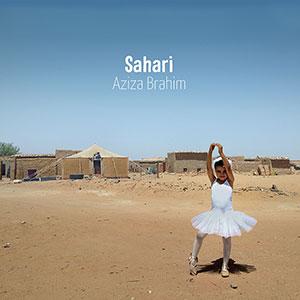 The message of Aziza Brahim's new album is already contained in the intriguing cover photo of 'Sahari'. A young girl poses in a snow-white tutu, but not in front of the normal privileged background you might expect, but on a dusty surface in front of a row of tents and mud shacks in a refugee camp. Not exactly a cheerful scene, but still the photo exudes optimism and hope for a better future, and with her music Brahim mainly wants to give a voice to the grief of her people, and the millions of displaced people in the world, and also give them a spark of hope: "My purpose is to denounce the extreme living conditions there and the great injustice that prevents Saharawi refugees from returning to their home. I try to capture the feeling of longing that my elsewhere express for the land that was taken away and for their past life in their country. But I know it's not just us; there are currently 70 million people forcibly displaced in the world. 26 million of them are refugees. The normalization of injustice is something that the Saharawi know well. By addressing that in the songs, I'm trying to fight against the prejudices some people have. We all see tragic news caused by the policies of reactionary governments. Of course that's influenced the writing of the songs on this new album. How could it not?".

One of the strongest songs in that context is probably 'Ard El Hub' written by Sahrawi poet Zaim Alal: "My homeland the land of love, the cradle of my childhood, to you the longings rise, that embrace the sky...".

For this album, Aziza teamed up with Amparo Sanchez, who was in charge of pre-production and added computer effects and keyboard accents to Brahim's music: "Amparo is an artist I've always admired. She suggested introducing electronics, and that meant recording in a different way. Before, we'd record everything live. This time we all worked in different studios then put the pieces together.". It resulted in an album that might be better suited for a western pallet than Brahim's previous albums: "For 'Sahari', I wanted to find that balance between the past and the present, between African and European music and to reach as many people as possible.".

This can especially be heard in tracks like 'Hada Jil' or title track 'Sahari', in which apart from Aziza's traditional tabal percussion also electronic beats can be heard. In 'Las Huellas' ("the footsteps") Aziza even goes reggae and Amparo Sanchez makes a vocal contribution as well. On 'Sahari', Aziza Brahim remains her rebellious self, but thanks to Amparo Sanchez's contributions the album may sound a little more accessible than her previous releases.