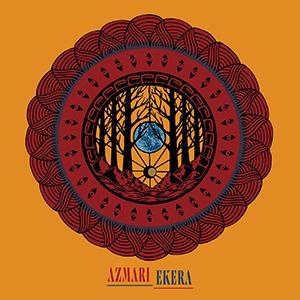 With their fellow townsmen of Azmari - Amharic for an Ethiopian singer or musician similar to a European bard or a West African griot - the Brussels based band Black Flower have  gained a musical sibling! The six-piece band was formed in 2015 and with 'Ekera', a term from Ethiopian Oromo culture referring to the afterlife or underworld, presents a first 6 track EP. While the band was initially mainly drew inspiration from Francis Falceto's excellent Ethiopiques series, a series of concerts in Istanbul in the spring of 2018 also introduced them to Turkish psychedelic rock from the 1960s, and instruments like the ney and the bağlama or saz started making their way into Azmari's repertoire. These days they cite bands and artists like Okay Temiz, Herbie Hancock, Cymande, The Heliocentrics, Fela Kuti, John Berberian and The Soul Jazz Orchestra as shining examples. Opener 'Dolmuş' clearly refers to the time Azmari spent in Turkey, because it's Turkish for "crammed van", an important form of public transport in Turkey's cities with a system consisting of small buses that drive a fixed route, translated from Turkish 'Dört Buçuk' means "four and a half" and refers to one of the most commonly used measures in Turkish music, and for dubby closing track 'Taksim Dub', the square where several of the protests against the ruling AKP party took root, as well as a popular nightlife area where Azmari played several times, the band called in the help of dub-duo Metta Frequencies, but 'Emnete' is a free-jazz reworking of Mulatu Astatke's Ethio-jazz composition of the same name, and with 'Mammouth', a song full of conjuring saxophone solos, the band also firmly remains in Ethiopian spheres. 'K'aïsita', "bow and arrow" in Amharic, was given that title because for this song the band for the first time used a Brazilian berimbau. Here too there's a Turkish connection, because during their journey through Turkey they discovered the oeuvre of the aforementioned Okay Temiz, who already introduced the instrument in his music during the nineteen seventies. Fascinating debut by a band we can't wait to hear more from!