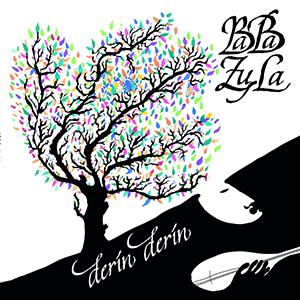 Leaving aside the 2017 double compilation album 'XX', 'Derín Derín' (Turkish for "deep, deep") is the first LP by Turkish musical rebel collective BaBa ZuLa in about 5 years. We may consider their mix of Turkish psychedelia, Anatolian folk and influences from German krautrock as a rebellious musical anti-movement in Erdogan's Turkey, but the members of BaBa ZuLa see their music more as art, as founder, vocalist and saz player Osman Murat Ertel explains: "Art is our language. We're an art group! My father and my uncle were artists. I grew up watching and hearing them. I learned that the barriers between (different) areas of art can be broken. I think there's a consciousness awakening, but it will take time to grow. We keep pushing!".

The instrumental part of this album evolved from music composed by BaBa ZuLa for a documentary on falcons: "We learned a lot about the birds while we were making the soundtrack. After we'd completed it, we began to think about new layers and elements we could add.".

The band's recipe has definitely become more layered over the years. For 'XX' the band collaborated with dub master Mad Professor and that genre became part of the BaBa ZuLa sound. In addition, 'Derín Derín' has also become a family project for Ertel: Murat wrote opener 'Haller Yollar/Ways & Circumstances' together with his wife Esma, and most of the lyrics of 'Salıncaksın/U Are The Swing' are based on an experience with his young son Arel: "We were at the park and I was pushing him on a swing. He started singing the words to me. I was crying with happiness, it was such a strong experience for me. I tried to get down everything he sang, and later I added more.".

The same song also contains echoes of BaBa ZuLa's collaborations with German drummer Jaki Liebezeit, who passed away in January of 2017, because the drum parts were played by Ertel's children on a drum kit Liebezeit still modified. Murat Ertel: "After losing him, I understood just how big an influence he was. He was like a mentor without even realizing it, and he could play those Turkish rhythms excellently.".

BaBa ZuLa continues to balance between present, past and future, and east and west, in a most intriguing way!