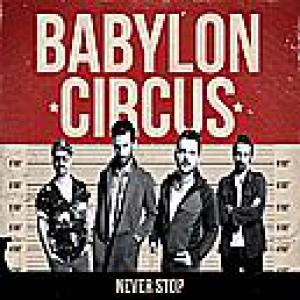 Babylon Circus, a band from Lyon, but nowadays operating from Paris, have been going at it for nearly twenty years now. Influenced by genres like punk, rock and ska, Babylon Circus has never been a fulfledged reggae band, but on their new album, 'Never Stop' (the title refers both to the long-lasting friendship of Babylon Circus vocalists David Baruchel and Manuel 'Manu' Nectoux as to the fact that the band is a long way from calling it quits) reggae influences are realy scarce. That doesn't make 'Never Stop' a bad album, far from it, but it will perhaps rather appeal to fans of English punk rock bands like The Clash and The Police ('Babylon Requiem', 'Nuit De Printemps', 'Never Stop') or French artists like Jacques Higelin and Renaud ('De Passage', 'Je Plane', 'Demain Dehors').