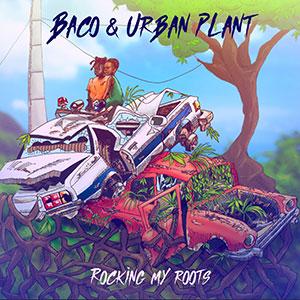 No, Baco Mourchid is not the owner of Baco Records (which until further notice is owned and run by French reggae band Danakil), but a representative of Mahorese music culture in France.

Mayotte is a French overseas department, part of the Comoro Islands, situated between Madagascar and Mozambique.

Baco's name sounded suspiciously familiar, and apparently our musical paths had crossed already, as in 2010 we reviewed 'Kinky Station', the debut album of Baco Hiriz Band, a reggae project he was also the driving force behind. However, with this ambitious triptych, Baco now returns to his Mahorese roots, where the music is dominated by the rhythms on the goma drums (usually a combination of the fumba, often used for soloing, the msindriyo, the bass drum, and the dori, providing the accompaniment).

Baco developed his own sound, which he refers to as r'n'g: "R" for reggae, rap and rock, all influences that can be found in his music, and "G" for the aforementioned goma drums. The first disc features the more traditional Mahorese compositions (opener 'Kwale' refers to a site on Mayotte which until 1947 served as a refuge for forced labourers on the island who tried to escape their fate, 'Mdru Wa Gomma' is an ode to the dance traditions on the island, and 'Sada', similar in content, recounting the time when the Mahorese still came together to surrender themselves to the spirituality of sacred ancestral chants), while the second one has a more cross-over feel to it; songs inspired by collaborations with Keziah Jones, Hanifah Walidah of Brooklyn Funk Essentials or rapper Earl Blaize ('La Paix Ou L'Epée', a reference to the Bible passage from Matthew 10:34, in which Jesus states: "Think not that I am come to send peace on earth: I came not to send peace, but a sword."; a song in which Baco criticizes the numerous Western "peace missions", which are always enforced by war and violence). Baco, who, on the three discs, constantly alternates between English, French and local Shimaore, concludes with a live recording, recorded back in 2014 on Mayotte.

This album is also a wake-up call... for the ever-increasing concreting of our natural environment ('Désolé Les Enfants'), for the numerous armed conflicts driven by greed and a thirst for power that continue tear up Africa ('Fighting The Violence In Me'), and in a more general sense, ever repeating human stupidity ('Bwana', 'Mafu').

And finally, if you opt for the vinyl edition of this release, you'll also get a booklet containing all the song lyrics and illustrated with different images representing man and his spiritual relationship with his environment, and a comic strip featuring drawings by Christophe Pittet, taking place in an ancient civilization in which the main character Raza discovers our world through time and space thanks to a musical celestial body that falls from the sky. An excellent triptych and clearly a labor of love, providing a beautiful insight into the lesser known music culture of Mayotte!