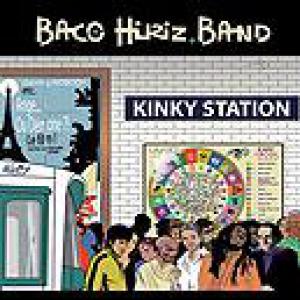 Baco Hiriz Band is a Parisian band around Baco, a singer/guitarist from Mayotte (an overseas territory of France in the Indian Ocean, somewhere between Madagascar and Mozambique). On their debut album, 'Kinky Station', the band plays French urban reggae (reminiscent of the work of Tonton David) with a pinch of soul and a hint of hip-hop. The ghost of Serge Gainsbourg is never far away either: the iconic singer-songwriter shows up on the cover of 'Kinky Station' (flanked by iconic figures like Bob Marley, Gandhi, Bruce Lee and Nelson Mandela) and 'Mon Nom Est Personne' is a stylistic tribute. The cover of the album refers to the Parisian metro network, not coincidentally the location where Baco and his band performed their music to passing commuters.