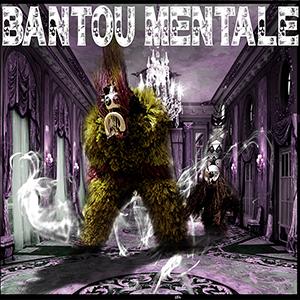 Franco-Congolese project Bantou Mentale is yet another sequel to the never-ending congotronics-saga. This time you can take this quite literally, as drummer and songwriter Cubain Kabeya in the past played with Staff Benda Bilili, Konono N°1, Jupiter & Okwess and Mbongwana Star, and guitarist Chicco Katembo is also a Staff Benda Bilili veteran. Together they also collaborated with Damon Albarn on his DRC Music project. Add to that vocalist Apocalypse, a student of the great soukous legend Koffi Olomide, who has been a fixture in the Congolese circuit in Paris for some time now, and Liam Farrell aka Doctor L, the Paris-based Irish producer we met thanks to his 2012 'The Great Depression' album and his later involvement with Mbongwana Star, and you get Bantou Mentale, a band that was formed in Château Rouge in Paris' 18th arrondissement ('Château Rouge'), but whose heart beats to the rhythm of hip-hop, soukous, ndombolo, funk, punk-rock, grime ('Suabala') in the Matonge district in Kinshasa. Even though their lyrics are in Lingala, so not quite intelligible for most people, Bantou Mentale certainly has something to offer in terms of content. For instance, songs like 'Zanzibar' and 'Sango' deal with the fate of the thousands of illegal immigrants, whether they are trapped in Libya or walking around in the streets of Paris, in stark contrast is the aforementioned 'Château Rouge', a celebration of the freedom and brotherhood of the migrant, in 'Boko Haram' (referring to the Islamic terrorist organization that operates mainly in northern Nigeria), the members of Bantou Mentale deplore the intellectual subservience and social servitude of many Africans, and with 'Syria' the band resists the umpteenth oil war that has only caused indescribable human suffering, and on a more personal note there's 'Papa Jo', a tribute to an old deceased friend from Kinshasa who always threw the wildest parties.