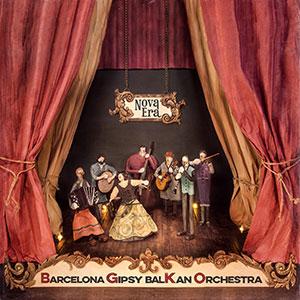 After an absence of just under three years, Barcelona Gipsy BalKan Orchestra returns with 'Nova Era', Esperanto for "new era". With the presence of Sicilian vocalist Margherita Abita, the Catalan band has a new front woman, and is turning a new musical page. Not that their concept or the band's sound has changed much, as once again the track list is filled with an infectious mixture of vocal and instrumental songs, ranging from Bosnian sevdah ('Ciganine Sviraj, Sviraj'), Jewish klezmer (opener 'Dancing With The Rabbi', Magia', more famous in the version by Boban Markovic), and festive songs from Bulgaria, Macedonia ('Kelejaca Jaca', well-known in the version by the late Macedonian diva Esma Redzepova), Serbia, Romania, Russia/Hungary ('Nane Tshoka/Fuli Tschai') all the way to Turkey ('Dere Geliyor Dere'). New chapter in the evolution of this excellent Balkan band, on 'Nova Era' sounding even more authentic than on previous albums.