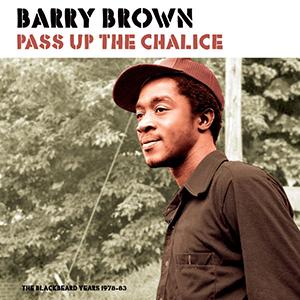 It had been a long time since we heard from Patate Records. However, the Parisian record shop of the same name still manages to keep its head above water, and the label itself also stayed afloat and mainly started to focus on vinyl reissues. Patate Records has always been a hallmark for the better roots and dub classics, and 'Pass Up The Chalice: The Blackbeard Years 1978-83', a compilation of work by the prematurely departed Barry Brown, is no exception. In the track list, 12 songs all produced by Rodguel 'Blackbeard' Sinclair, David 'Tapper Zukie' Sinclair's older brother, mixed by grandmasters Scientist and King Tubby, and originally released on Blackbeard's Hulk label (with the image of green Marvel hero Hulk as its logo). Among others, 'Pass Up The Chalice' features gems like 'Rich Man Poor Man' or opener 'We Nuh Run', of course title track and classic 'Pass Up The Chalice' (over a version of the Death In The Arena riddim), the delicious 'Jah Jah Protect Them' over the Love Me Forever riddim (and also known as 'Jah Jah Guide Them'), I'm Moving On', a song over the Sacrifice riddim that could double as Bown's musical testament, and finally the rare 'Coolie Carry Basket', Trinity's deejay version over Barry's amazing 'Step It Up Youthman'. Excellent compilation of works from a Jamaican top talent who disappeared far too soon!