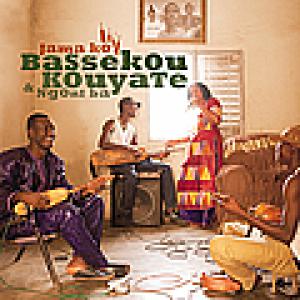 What for a long time was considered impossible, became terrible reality in 2012: Mali came under threat of a fundamentalist Muslim movement tearing the country in two with their version of sharia law. It was in those difficult and uncertain circumstances ngoni master Bassekou Kouyate recorded 'Jama Ko'. In music there's often talk of a "difficult third album" and that's something that in the case of 'Jama Ko' can definitely be taken literally. On the day the recordings at Studio Bogolan were scheduled, rumors of a military coup started seeping through and soon it was confirmed President Amadou Toumani Toure - a big fan of Bassekou's work - was removed from office. With the Islamists advancing from the North, the situation in the capital Bamako became tenser by the hour. Bassekou decided not to let things get to him, plugged in his ngoni and started playing 'Ne Me Fatigue Pas', an indictment of the events in his country in which his ngoni seems to wail harder than ever. In the liner notes of the album Bassekou states: "There are over 90% Muslims in Mali, but our form of Islam has nothing to do with radical Sharia; that is not our culture. We have been singing praise songs for the Prophet for hundreds of years. If the Islamists stop people making music, they will rip the heart out of Mali!". In that perspective - which yours truly fully endorses - it's not more than logical that Bassekou gave one of the artists from the North of Mali a prominent place on this album and Khaira Arby represents her stricken colleagues in the Timbuktu region in an excellent way. Meanwhile an all-star cast of Malian musicians has recorded the song 'Mali Ko' in which they jointly denounce the Islamists invasion and plead for a peaceful Mali.