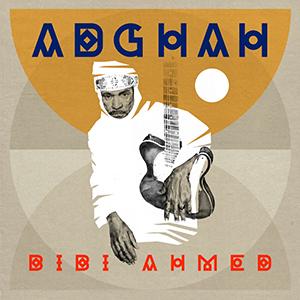 Nigerian Tuareg guitarist/vocalist Bibi Ahmed is mainly known as the front man of Group Inerane, but for 'Adghah', Gregor Samsa, founder of the German Sounds Of Subterrania label, managed to convince the man to record his first solo effort. The result is an extremely subdued album on featuring Ahmed's voice often merely accompanied by guitar and percussion; instruments Ahmed all played himself. Bibi taught himself to play the guitar as a child, but at a later age he was taught the tricks of the trade by Nigerian master Abdallah Ag Oumbaduogo. The title of the album refers to a mountain that forms a crossroads on the border between Algeria and Niger. In the track list light-footed love songs like 'Tamiditin Aïcha' or 'Tamiditin Janette' (an ode to Bibi's wife), but also socio-politically inspired tracks like 'I Fitilan' and 'Lucia Taura' (about the Tuareg emancipation struggle in Niger), or 'Marhaba' and 'La La La', in which he respectively welcomes the Libyan refugees to Niger and warns his own compatriots to reflect before embarking on the life-threatening journey towards Europe. Intimate desert gem.