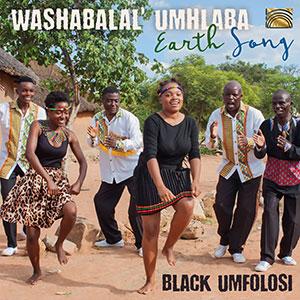 A bit surprisingly, 'Washabalal'umhlaba' is our first introduction to the work of Black Umfolosi, especially when you know this Zimbabwean music icon has a career spanning almost three decades and can safely be considered the Zimbabwean counterpart of South African music legend Africa Black Mambazo.

The band was founded in 1982 by a group of befriended students at the George Slumdika School in Bulawayo, the capital of the Ndebele-speaking minority in Zimbabwe. About the origins of the band's name opinions differ. According to one source, they named themselves after the Black Umfolosi Regiment, nineteenth-century Zulu revolutionaries, but it's equally plausible that they took the name from the Umfolosi River that flows in the South African province of KwaZulu-Natal, also the region the ancestors of the Black Umfolosi members hailed from.

Black Umfolosi's predominantly vocal a cappella style is called mbube, which literally translated from Zulu means "lion", originally just being the title of a 1939 song by South African artist Solomon Linda, which would go on to become known as 'The Lion Sleeps Tonight'.

In 'Coming Your Way', the opener on 'Washabalal'umhlaba' ("earth song"), which you may consider as an intro, the band announces itself, but elsewhere in the tracklist they go gospel, like in 'Usemafini' and 'Our Lord', two songs of praise to the Almighty, or 'Izono Zethu', a call to repent for your sins and accept baptism as redemption, In 'Busis'abazali' they talk about respecting your parents and appreciating the sacrifices they made for you, 'Isivivinyo' is about the problems that can arise in a marriage when the breadwinner suddenly loses his or her job, and, finally, title track 'Washabalal'umhlaba' is an ecological warning about climate change and the impact it has on the lives of millions of Africans.

Closing track 'Ihoso Beat', musically is an odd one out, as it's the only song on 'Washabalal'umhlaba' also featuring drums, shakers, whistling and clapping, and is based on the traditional amabhiza dances of the Bakalanga or Kalanga people.

Recommended listening for amateurs of this southern African vocal a cappella tradition!