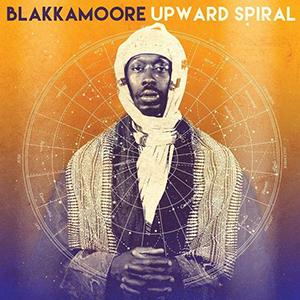 Blakkamoore is the alter ego of Wayne Sharne Henry, a Guyanan who moved to Brooklyn, New York, who previously used the alias Jahdan Blakkamoore and started his musical career simply as Jah Dan. Over the years, Blakkamoore seems to have dabbled with as many musical styles as he had aliases: first active in the New York hip-hop scene (apart from collaborations with Boot Camp Clik and Smif-N-Wessun, mainly as a member of the Noble Society collective), in 2009 Blakkamoore released the Rupture and Dutty Artz produced dubstep album and long-player debut 'Buzzrock Warrior' and could be heard on Major Lazer's album debut, 'Guns Don't Kill People... Lazers Do'. This was followed by the more reggae-flavored 'Babylon Nightmare' (2010) and in 2013 Blakkamoore collaborated with Snoop Dogg, releasing his 'Reincarnation' under the Snoop Lion alias (as far as yours truly is concerned, one of the biggest farces in recent reggae history). Snoop now returns the favor in gyal tune 'Get Down Tonight', even though accompanied by a funny animated video clip, immediately our least favorite song on this album, produced in collaboration with Zion I Kings, on which Blakkamoore, a bit like Kabaka Pyramid, merges the worlds of hip-hop and reggae. The EDM-pop meets dancehall of 'Underneath The Lights' could not really charm us either, but luckily the track list contains some real gems as well. Apart from the duet with Snoop Dogg, 'Upward Spiral' also features combinations with Biga*Ranx (the catchy 'Skyscrapers'), Alandon, a Jamaican who relocated to Hartford, Connecticut (the r&b of 'Tomorrow Belongs To Us'), and, our personal favorite, the posthumous 'Earth Cry' with the lamented Vaughn Benjamin aka. Akae Beka, an anthem that manages to capture the mood of the COVID-19 pandemic perfectly. Goosebumps! In opener 'Play The Role', riddim fanatics will recognize City Kay's Big Slap riddim and for closing track 'Take Time', Blakkamoore used I Grade Records' Perfect Storm riddim. Other recommendations from the track list are 'Mash Down Georgetown', just like 'Spotlight' an ode to his homeland Guyana over a riddim slightly reminiscent of Ini Kamoze's 'Trouble You A Trouble Me', the delicious 'Golden Lights', ganja tune 'Red Ites', and finally love tune 'Body Talk'. Versatile album by a seasoned artist!