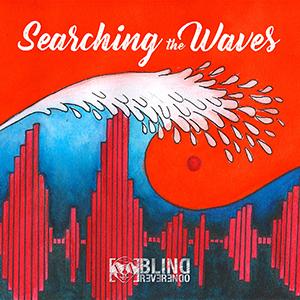 Blind Reverendo is the alter ego of Barcelona-based Italian singer-songwriter Mario Rivoiro, a stage name you can even take quite literally, as Mario lost his sight when he was eight years old. However, Rivoiro never resigned himself to his faith and went on to study music, learn to play percussion, guitar and piano and eventually carved out a path in music. In 2009 there was already 'Letti Di Notte', followed in 2012 by 'Voces', for which he collaborated with Macaco and Bunna of Africa Unite. For 'Searching The Waves', Mario surrounded himself with a whole series of artist friends (Italian jazz-blues singer Gloria Bianco Vega in 'Never Stay On Silence' - immediately our favorite song from the track list - vocalist, bassist and sound engineer Josh Sanfelici in 'Once Again', Luca Dammicco in 'Bury All The Weapons', DJ Ardy in 'Wake Up', Mexican band Las ChaChas in title track 'Searching The Waves' and finally Gianluigi 'Miraflowers' Deiana, who provided a dub mix of opener 'When I Was 15'), resulting in seven new tracks in which he mixes reggae with heavy metal influences ('Bury All The Weapons'), electro ('Once Again'), punk ('Wake Up') and dubstep (the final dub mix of 'When I Was 15' by Gianluigi 'Miraflowers' Deiana). Certainly no food for purists, but definitely worth discovering for the more adventurous reggae lover with an eclectic pallet.