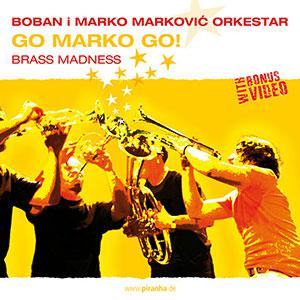 Balkan music is above all about setting a certain mood and Serbian trumpet player Boban Markovic is an absolute legend in the genre. As the favorite composer of film director Emir Kustorica (Markovic co-wrote the soundtrack for 'Underground' and 'Arizona Dream') he gained worldwide fame. Apart from playing music, Boban's son Marko has also had a little stab at acting; as a foretaste to his role in 'Gucha - Distant Trumpet' (directed by Dusan Milic, Serbia 2006) 'Go Marko Go!' also contains the trailer of that film. This is already Markovic' fourth album for the German Piranha label, but what makes 'Go Marko Go!' stand out is the fact it sounds very jazzy and significantly more subdued than most Gypsy albums.