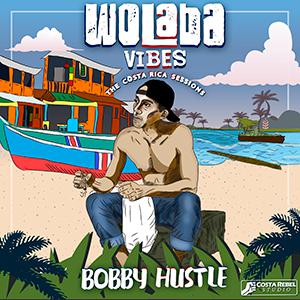 Yours truly got to know Seattle based artist Bobby Hustle thanks to his 2015 'It's The Hustle' album. During a short promotional tour for that album in Costa Rica in 2016, the day after a performance in Puerto Viejo, Bobby was stopped by the local police who subsequently found a considerable amount of marijuana in the singer's car and promptly arrested Hustle. Bobby spent the next four days in a police cell in Limon before a judge released him under conditions pending his trial, with Hustle having to hand in his cell phone, wallet and passport to prevent him from fleeing Costa Rica. Wolaba, a neighborhood in Puerto Viejo, a port town on the Caribbean coast of Costa Rica, where things like rice and peas, patties, fresh sugar cane, Jamaican patois and reggae music are so ubiquitous that you might as well imagine yourself in Jamaica, was forcibly to become Bobby's home for over a year. Hustle soon decided to make virtue out of necessity and recorded this six track 'Wolaba Vibes' EP, in collaboration with the local Costa Rebel Studio label. Apart from two solo tracks (opener and title track 'Wolaba Vibes', a tribute to the neighborhood that provided him with a home for a year, and love tune 'I'll Be There', even though Costa Rican guitarist Nacho Paez of Cocofunka can also be heard in this song), the rest of the track list of 'Wolaba Vibes' is filled with combination tunes. For the catchy ganja tune 'Strong Weed' Bobby joined forces with Costa Rican reggae band Talawa Reggae Army, in 'Cold World' it's Ras Manuel, also from Costa Rica, who joins Hustle. That leaves 'The Wall', a clear criticism addressed at the current president of the United States and his xenophobic followers, for whom Bobby of course chose to work with up-and-coming Mexican talent Jah Fabio, and in the somewhat (too) commercially sounding closing track 'Feel No Pain', about the healing power of reggae, finally Martinican-Dutch Rapha Pico makes an appearance. Enjoyable EP with which Bobby Hustle proves the right music can literally help you through a turbulent period.