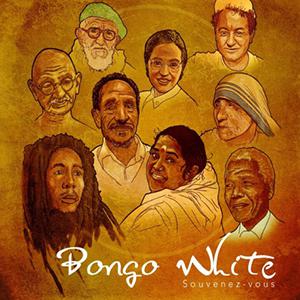 Bongo White is a project around the Toulouse based singer-songwriter of the same name (real name Damien Dernoncourt), who, after a first Guadeloupe-recorded EP in 2010 and his 2016 debut album 'Pourquoi Le Monde Tourne Carré', now presents this successor. For 'Souvenez-vous' White and a number of other members of his band travelled to Kingston, where they collaborated with drummer Leroy 'Horsemouth' Wallace, bassist Daniel 'Axeman' Thompson and keyboardist Robbie Lyn at the Mixing Lab Studio. The album opens with a version of the nyahbinghi classic 'Bongo Man A Come' (here simply 'Bongoman') and 'Donnons Le Meilleur De Nous-même' is also in the same vein, but apart from the somewhat mellow 'Rêvez' (of which the tracklist also features a dub version called 'Les Étoiles'), on 'Souvenez-vous' Bongo White mainly serves solid roots tunes, continuously alternating between English and French. For some vocal support White turned to ex-Groundation vocalist Kim Pommell, who joined him for 'Time Is The Master' (one of the highlights on 'Souvenez-vous'), and the otherwise unknown Iya Tundeh, with whom he recorded 'Send Out Your Light'. We already mentioned 'Time Is The Master', but other highlights are title track 'Souvenez-vous', in which Bongo White cites the names of heroes from the black emancipation struggle, like Thomas Sankara, Nelson Mandela, Martin Luther King Jr., Bob Marley, Marcus Garvey, Mohamed Ali or even Aimé Césaire, and asks us never to forget them, then there's eco-anthem 'Laissez La Terre Tranquille', and finally the profession of faith 'I'm A Rasta'. Solid French-Jamaican roots album!