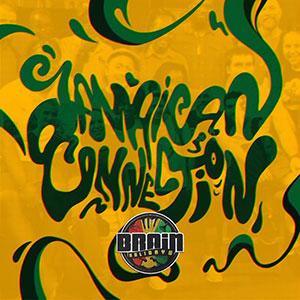 Yours truly got to know Croatian Brain Holidays in 2018, thanks to the release of their 'System Error' album. The Croatians now return with 'Jamaican Connection', a title referring to a long-cherished dream of the band members which finally became a reality earlier this year: performing and recording in the home country of reggae, Jamaica!

'Jamaican Connection' was recorded at the Marley family's Tuff Gong Studio, where, under the able guidance of producer and sound engineer Roland McDermott, they collaborated with Jamaican artist Italee (who can be heard in the aptly titled opener 'Brain Holidays In Jamrock', 'Petar Pan' and 'Unity'). In order not to lose the connection with their fan base, they also asked rapper, singer-songwriter and producer Saša Antic from formation The Beat Fleet, appearing here under the pseudonym Alejandro Buendia, and Kandžija and Brico, also active in the Croatian hip-hop scene, to make a vocal contribution.

In Jamaica they also bumped into Serbian trombone virtuoso Hornsman Coyote, and his trombone shines in songs like the aforementioned opener 'Brain Holidays In Jamrock' and closing track 'Peace & Love To Everyone'.

For some of the songs, a basic knowledge of Croatian is no luxury. 'Kuća Puna Ritma' (loosely translated "house full of rhythm") is a warm call for equality, 'Hladan Kao Led' ("cold as ice"), in which the band talks about a world where everything is frozen, seems to fit the current pandemic reality in which almost everything has come to a standstill, and for 'Fotosopirana' ("photoshopped") they zoom in on local Instagram phenomenon Petrovic Mare, even though the song is actually a criticism of everything that is fake and bad about social media. By the way, you may also note those above-mentioned songs as our personal highlights from the track list.

Another more than convincing release from this pride and joy of Croatian reggae!