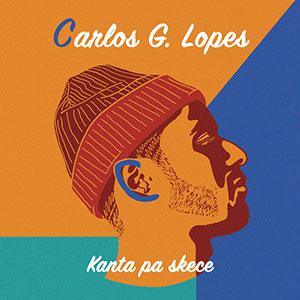 The Cape Verdean music scene seems to be buzzing with new talent! Only recently we presented the long player debut of ex-Cesaria Evora percussionist Miroca Paris, and here's another young Cape Verdean following in his footsteps. Carlos G. Lopes was born in Piku Burmedjo ("Red Mountain"), a small village on the island of Santiago. Among his earliest musical influences was traditional polyphonic batuku or batuque music (to which Lopes pays tribute with closing track 'Mûdjer Di Pé Na Tchôn'). A few years down the line he then discovered the soul of greats like Sam Cooke, Marvin Gaye and Otis Redding, and at age sixteen decides to take singing lessons himself, determined his future would be in music. He subsequently enrolls at the Conservatoire National de Nice and then that of Paris, where he studies opera singing, jazz and modern music. On 'Kanta Pa Skece' ("singing to forget") Carlos mixes Cape Verdean genres like morna, coladeira and funana, with influences from soul, jazz and a pinch of reggae (the infectious 'Nôs Tradiçon Di Terra'). Plenty nostalgia or sodade to go around, but that being said, most of the songs on the album are rather upbeat in nature. 'Mamai', the first single from the album, is the first song for which Carlos reverted to Cape Verdean Creole (being used to singing in French or English), and is a wonderful tribute to his grandmother. For the cover of the album Lopes had his ear painted blue to highlight the fact that for listening to music we need our ears. The blue color also reminded the singer of the beautiful Cape Verdean skies. The island nation in the Atlantic Ocean is starting to fascinate yours truly more and more with each album!