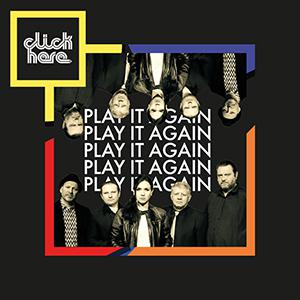 The Balkan hype has been behind us for a few years now, but now and again some highly original experiments with the genre still surface. Take French producer Benjamin Martin, better known as DJ Click, for example, who this time, under the name Click Here, joined forces with a host of musicians hailing from Moldova, Romania and France (Nadia Potinga - vocals/violin, Anna Mario Iovkova - vocals, David Krupinski - guitar/keys, Viorel Potinga - accordion/keys, Tudorel Mihai - saxophone/flute/vocals). On 'Play It Again' (a title referring both to the fact that a song is so good that you immediately want to hear it again, but also to Play It Again Sam or PIAS Recordings, the influential Belgian label that was founded in the early nineteen eighties) he lets the Balkan genre collide with the new wave sounds from the nineteen eighties; not an obvious combination, but damn this works! Most striking are 'Meyta', a reworking of Kim Wilde's 'Cambodia', a Balkan cover of Depeche Mode's 'Enjoy The Silence', and the somewhat out of place 'Sanie Cu Zurglai/Johnny Johnny', Balkan-brass meets Edith Piaf. That being said, the rest of the tracks on 'Play It Again' can also effortlessly convince. Like the excellent opener 'Codrule' for example; the perfect symbiosis between the dark New Wave from the early nineteen eighties and the Balkan genre (or how music in Eastern Europe could have developed if the Iron Curtain wouldn't have prevented it from doing so), 'Heaven' reminding us of something by Orchestral Manoeuvres in the Dark, or 'Rom & Roland', a gypsy tribute to the iconic 1985 Roland TR-707 drum machine. More than excellent stylistic exercise!