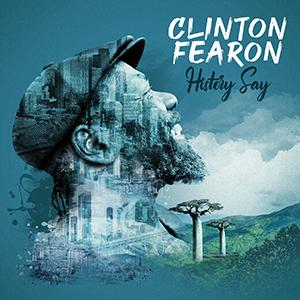 With a musical career spanning more than 5 decades, Clinton Fearon has nothing left to prove. Still, the Jamaican veteran spent more time than usual on 'History Say'. As usual, most of the album was recorded in Seattle with Clinton's regular sound engineer Mell Dettmer behind the buttons, but for the first time since he left the ranks of The Gladiators, Fearon also returned to the studio in Jamaica, where he worked with, among others, Sly Dunbar, Gladiators-guitarist Clinton Rufus and producer Steve 'Lenky' Marsden. The visit to his motherland seems to have motivated Fearon to dig into his own musical past, as songs like 'Crazy Ride' or even more 'Mr. Pretender' are stylistically very similar to what The Gladiators produced when they recorded at Studio One, 'Gimme Some' is early reggae, and for the cheerful calypso of 'Calypso Monkey' Clinton delved back even further. Compared to Fearon's previous albums, 'History Say' also features a remarkable amount of collaborations: 'Together Again' seems to be completely tailored to Alpha Blondy, for 'Mr. Pretender', in which he denounces the hypocrisy of politicians, Clinton teamed up with Hawaiian singer-songwriter Mike Love, he drummed up Spanish trio Emeterians for the harmonies of closing track 'I Will', and, finally, 'Gimme Some' is a duet with his daughter Sherine. The most personal song in the track list is undoubtedly 'French Connection', in which Clinton sings of his love for his French wife Catherine and even throws in a few lines in French: "Certains pensent c'est de la provocation, we know c'est de l'éducation, c'est aussi de l'amour et de l'affection ... douce sensation.". A true gem of a reggae album!