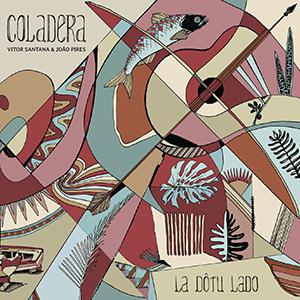 With 'La Dôtu Lado' ("there on the other side") duo Coladera, consisting of singer and guitarist Vitor Santana from Belo Horizonte in Brazil and Portuguese vocalist/guitarist Joao Pires, once again prove how hip and yet little explored Cape Verdean music is. The name of the band refers to the coladeira, a Cape Verdean music genre with influences from Portuguese fado and rhythms from Brazil and Angola, but genres like batuque and funana are also explored, with the duo alternating between Portuguese and Cape Verde Creole. For 'La Dôtu Lado', Vitor and Joao were joined by percussionists Marcos Suzano, a Brazilian pandeiro master (a Brazilian version of the tambourine) and Cape Verdean Miroca Paris, for years a regular in Cesaria Evora's backing band, who in 2017 left a strong impression with his solo debut 'D'Alma'. The Cape Verde Islands were uninhabited until they were discovered by the Portuguese in 1460 and would then become an important link in the transatlantic triangular trade between Europe, Africa and America. The fact that a Brazilian and a Portuguese find each other in Cape Verdean musical traditions is no coincidence, explains Vitor: "In Brazil there is a lot of DNA from Cape Verde and West Africa. You can find this DNA in many rhythms. One of them is coladeira. It's a little bit samba, a little bit Bahia. Cape Verde is in the middle.". Santana is also an adherent of the Afro-Brazilian candomblé tradition that was imported into Brazil by slaves from West Africa. On 'La Dôtu Lado' this tradition is highlighted in 'Luz De Yaya', dedicated to Yemayá, the orisha of the rivers and oceans, also a perfect synthesis of the entire Coladera project. True gem of an album we'll gladly award a spot in our annual world music album top ten!