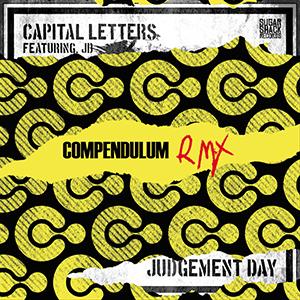 Sugar Shack Records has a tradition of also releasing a dub version of the vocal albums they turn out, and for 'Judgement Day', last year's album by Capital Letters featuring JB, the label decided to call on Chris Potter aka Compendulum. He first drew our attention with 'Compendulum', a project for which reworked songs by Black Symbol, Bunny Marrett, Jashwha Moses and Capital Letters and described as: "This isn't a compilation, it's not a remix project, it's not the vision of one producer or musician, it's not old and it's not new, yet it is also in part all of those things...". Last year he was also responsible for the final mix of Black Symbol's 'Behold' and did the same for Capital Letters' 'Judgement Day'. As the title already indicates, for 'Judgement Day RMX', Compendulum once again did not opt for the classic dub approach, but decided to remix eight of the songs from 'Judgement Day' (rest assured, for the real dub enthusiasts among you, the track list also contains four so-called drub-a-dubs). Opener 'Follow Rastafari' becomes 'Love Rastafari' and seamlessly blends into 'Judgement Soon Come' (on the original album title track 'Judgement Day'), in which Compendulum incorporated audio fragments from 'What Is Repentance', a speech by American evangelist and minister Billy Graham. Compendulum transformed 'Talking' into the instrumental 'What Are They Doing?', and to give 'Yard Breaker', his version of 'House Breaker', some extra flow, he invited MC Joe Peng. 'Cornerstone', Compendulum's version of 'Old Corner Stone', remains closer to the original, but 'D Roots' ('The Roots') is turned into nyahbinghi 2.0, and for '2 Much War' ('Too Much War') Compendulum used a number of audio fragments of war declarations, ranging from the English declaration of war to Germany from 1939 on the eve of the Second World War, followed by that of the United States to Japan after the attack on Pearl Harbor in 1941, to Tony Blair's call for war against Saddam Hussein, leading up to the Iraq war, and the speech by president George W. Bush after the attacks on the World Trade Center in New York and the Pentagon in Arlington, Virginia, which would lead to the so-called War on Terror. More than excellent reinterpretation of the original by Capital Letters featuring JB!