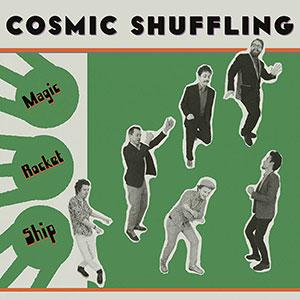 A few months after we introduced you - albeit twenty years after the facts - to Open Season, the veterans of the Swiss ska and rocksteady scene, we now turn to Cosmic Shuffling, a six-piece band from Geneva, with 'Magic Rocket Ship' presenting a first full-length album.

With 'Cosmic Goes Wild', in 2017 they already presented a first 4 track EP that was very well received in the Swiss press.

For 'Magic Rocket Ship' the band pulled out all the stops to make their music sound as similar as possible to that of authentic ska and rocksteady from 1960s Jamaica. For the recording process they used ribbon microphones, magnetic tapes and analog saturation, and Spanish producer Roberto Sanchez was brought on board to provide the nine tracks with the right mix.

Lyrically, the most striking song from the track list has to be 'Anne Bonny', recounting the tale of a notorious female pirate who was active in the Caribbean in the early eighteenth century, but other highlights include 'Cat In The Hat', turned into pure 1980s English 2Tone ska by vocalist Léo Mohr, the instrumental ska of 'Night In Palermo', the delicious rocksteady of love tune 'By Your Side' or the similar 'Life Goes On', for which Mohr pulls out his falsetto once more.

Highly enjoyable debut by a band that can certainly be considered an asset to the Swiss and, by extension, European ska and rocksteady scene!