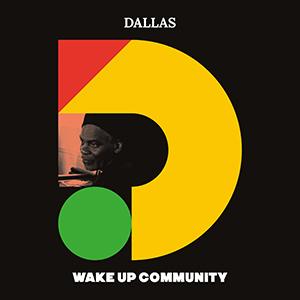 The story behind this 'Wake Up Community' by Bristolian Dallas, immediately reminded yours truly of that of 'Joshua To Jashwha: 30 Years In The Wilderness', the 2012 debut album of his late fellow townsman Jashwha Moses. Just like Moses, after the 1984 release of 'Peacemaker', a first 12inch single, Dallas, born Dennis McCalla, had to wait more than thirty years for this first long-player to manifest. Dallas was born in Jamaica, but relocated to the UK in 1963 and took his first steps in the music as a member of vocal harmony trio The Mighty Triers, together with Delroy O'Gilvie, who later joined Black Roots but sadly passed away last year. 'Wake Up Community' is one of the latest achievements of Black Slate bassist Elroy Bailey, who produced the album together with Matumbi drummer Lloyd 'Jah Bunny' Donaldson. Musically, Dallas left nothing to chance: sound engineer on duty was Nick Manasseh and Jah Bunny played all drum parts himself, flanked by Barry Dread on bass and Gyasi Crossdale and Keith Mindlink of Royal Sounds on guitar and keyboards. On 'Wake Up Community' Dallas alternates between lovers and roots. As for the more conscious tunes in the track list, stylistically Dallas' voice is somewhat reminiscent of that of Peter Tosh ('African Brothers', 'Community Parasite', 'Jah By My Side' and certainly 'Peace Maker', a revamp of his 1984 single) or Lucky Dube (opener 'Wake Up'), but it were mostly delicious love tunes like 'One Woman', 'Love From A Distance' (Dallas' version of 'Waiting In Vain' so to speak) or the super catchy breakup tune 'From Now On', that drew our attention. Very enjoyable old school reggae album as you don't often hear them anymore!