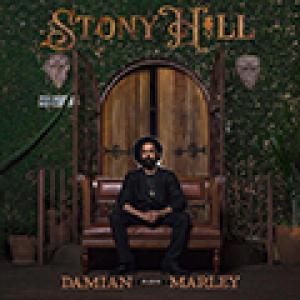 Excluding his collaboration with Nas and Skrillex, it had already been since the release of his 2005 instant-classic 'Welcome To Jamrock' since Damian Marley treated his fans to a new solo album. Expectations for 'Stony Hill' were high, but Jr. Gong Jr. never really disappoints. The track list of 'Stony Hill' contains no less than 17 new songs (and that's not even counting the intro in which the voice of Big Youth can be heard). 'Nail Pon Cross' and ganja tune 'Medication' (a song about the medicinal benefits of marijuana and our personal favorite on 'Stony Hill') were already previously released as singles, but opener 'Here We Go', in which Jr. Gong immediately sheds light on what he's been up to the past few years, the delicious roots tunes 'Looks Are Deceiving' and 'The Struggle Discontinues' (that last song might as well have come from father Bob), the intimate break-up ballad 'Autumn Leaves', 'Everybody Wants To Be Somebody', a song about the yearning for fame that is present in many of us, and the African influenced 'Slave Mill', featuring the telltale chorus: "Sad to see the old slave is grinding slow, but grinding still!", are all of a similar level. For 'Stony Hill', Damian Marley sampled left and right, but all the information can be found in the liner notes of the album, and when done respectfully, we don't really mind. For 'Here We Go', Dennis Brown's 'Here I Come Again/Have No Fear' was recycled. In the aforementioned 'Nail Pon Cross', in which Damian warns not to be too quick in your judgement of others, the same happened with Black Uhuru's 'Solidarity', for the dancehall influenced 'R.O.A.R.', Marley sampled Buju Banton's 'Me & Oonu', and for 'Caution' we return to Black Uhuru, this time for 'World Is Africa'.

But Damian doesn't stop at musical sampling, as in his often impressive lyrics (our advice: listen to 'Stony Hill' at least three times in a row) he winks at other songs and artists left and right. In 'Medication' Marley incorporated excerpts from Cypress Hill and Sonic Youth's 'I Love You Mary Jane' as well as Louis Armstrong's 'What A Wonderful World', and in the disco flavored party starter 'Living It Up' you'll hear references to 'Yo Home To Bel Air', the theme tune of nineties television series 'The Fresh Prince Of Bel-Air'. With roots tune 'Looks Are Deceiving' Damian clearly pays homage to The Gladiators 'Looks Is Deceiving'. 'Picture Perfect' already appeared on Stephen Marley's 'Revelation PT. II (The Fruit Of Life)' and contains a nod to Ziggy Marley's 'Lee & Molly'. Amateurs of hip-hop better be all ears for 'So A Child May Follow', as it contains excerpts from Slick Rick's 'Hey Young World'. The guest list of 'Stony Hill' is quite short: in addition to the aforementioned Big Youth, Damian's brother Stephen Marley makes no less than three appearances, but apart from that there's only Major Myjah in 'Upholstery'.

In conclusion, we should perhaps mention maybe that the title of the album of course refers to Damian's Stony Hill Corp: "...a diversified company focused on multiple areas of the cannabis, hemp and CBD industry. The company is focused on select, branding, investment and partnership opportunities in the real estate, recreational, health and wellness, nutraceutical, and media industries. Stony Hill has several strategic partnerships currently in place and is actively pursuing additional partnerships and other strategic growth opportunities.". And so Junior Gong once again proves not only to be a musical mastermind, but a true polymath!