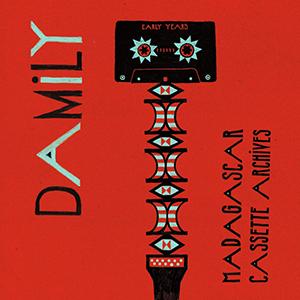 Damily's version of the tsapiky-sound is characterized by a scorching drumbeat played on zebu skins, rebuilt electric guitars, high-pitched voices and the use of a lot of homemade material, and is typical for the region around Tulear in the southwest of Madagascar.

By the way, a tsapiky orchestra is not a group of musicians, but the description for a collection of instruments: an electric guitar and bass, drums, two amplifiers, one or two speakers and some microphones for the voices.

Because instruments are often very expensive, most musicians in Madagascar only come into possession of their own instrument at a later age. Damily only bought his first guitar in 2000. During his childhood years in his hometown Tongobory, he played a small three-string toy guitar, until his neighbors loaned him a self-made but full-fledged instrument.

As Damily was endowed with rather short fingers, he had a hard time reaching the lower strings on the neck of his instrument with his ring finger. Instead of removing the sixth string, something more Malagasy guitarists from that period did, Damily developed a special playing technique playing the two bass strings at the same time; a technique born out of necessity but giving more depth when playing the harmonies, soon picked up by other Malagasy guitarists and nowadays considered a regular feature of tsapiky guitar playing.