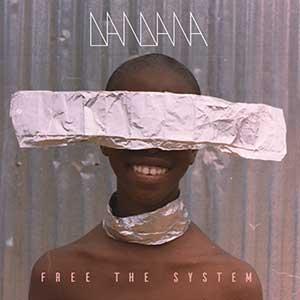 DANDANA is a Dutch-Gambian-Senegalese project founded in 2016 by Dutch bassist Bas Ackermann, not only a musician but also director and founder of State of Mic, a well-known music and multimedia company in Serekunda, the largest city in The Gambia.

There he met percussionist and singer-songwriter Ebou Gaye Mada and guitarist Filly Diona, and after some joint jam sessions the seeds for DANDANA were sown.

You'd think the band's name is an expression in Wolof or another West African language, but in fact it's just a corruption of the term "dondada" from Jamaican patois, Bas picked up watching the movie 'Belly' (Hype Williams, 1998) and liked the ring of.

In the summer of 2017, the band members travelled to Ziguinchor in Senegal, Filly's hometown, where they started recording the first demos for this album. Early 2018 producer Tijmen van Wageningen, Bas and former Ifang Bondi sabar-percussionist Ebou Gaye Mada moved back to The Gambia, where they finished the album together with Filly and Modou.

Bas summarizes 'Free The System' as follows: "What I find important with and about this album is that it really brings worlds together. For many people the traditional Senegalese mbalax music is not easy to grasp. The combination of a more western ambient and electronic sound and the more analogue traditional sound makes it a kind of "new world".".

With opener 'WDYK/Yo Lor Chi Ham' ("Yo lor chi ham" is Wolof for "what do you know?") the album kicks off in a festive mood, immediately followed by 'Guelewar', featuring blind Senegalese vocalist Pa Mboob on vocals, and at the same time an ode to the aforementioned Gambian band and Senegalese film director Ousmane Sembe, who, back in 1992, directed a movie called 'Guelwaar'. The instrumental 'Ndanka Ndanka', sabar and talking drum percussion meets eighties synths and Filly Diona's guitar, can be translated from Wolof as "calm down, calm down", and refers to the Gambian mentality of looking at things from day to day.

'Baye Fall', for which DANDANA had a local Baye Fall singer from Serekunda sing the vocals, which resulted in a conjuring spiritual ode to the Most High. As the title indicates, we switch to French for 'Mon Afrique'. The song, which, somewhere halfway, evolves into western synthpop, is meant as an ode to the African continent, which is still all too often portrayed in a negative way. In the intro you can hear the famous Burkinabe-Malian musician and actor Sotigui Kouyaté talking about the history of the universe.

Somewhat surprising in content is 'Ever Living', a tribute to visual artist Guido Johanns, who passed away in 2019, but often drew on African art for inspiration in his work. In this track the balafon, played by Soulayman Jobateh, occupies a prominent place.

For closing and title track 'Free The System', about the gap between the older and the younger generation, Ackermann also recorded a video clip, even though he prefers to describe it as a musical short film: "We wanted to make a clip inspired by retro science fiction and afro-futurism, but in the analogue way of the seventies and eighties. One morning I was sitting outside a store with my analog camera waiting for my tapa lapa, a Gambian bread, when Amadou, a little boy, started imitating me. He had a stone with a hole in it and pretended to be a photographer. The idea for 'Free The System' was immediately found! The storyline of 'Free The System' symbolizes on the one hand the gap between the older and the younger generation, where the former seem to have lost contact with children's creative thinking, often reclaiming it by force. The old man in the video represents that mature and traditional way of thinking. In Africa older people are highly respected and it is almost a sin to go against them. It really makes the reaction of the boy, who, at the end of the video, sticks out his tongue, a rebellious act. On the other hand, the bigger message of the video is that we have to break the system's mold. It's an old traditional system that only benefits those who are part of it, and things like the current global COVID-19 pandemic and the Black Lives Matter movement make it more than clear that it's time for change!".

More than intriguing Afro-Western experiment and definitely one of this year's highlights thus far!