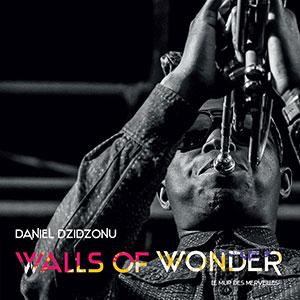 After the simultaneous release of the 'Vikpomé' and 'Unknownland' EP's in 2017, Belgian-Togolese trumpeter Daniel Dzidzonu finally treats his fans to a full-fledged album. That being said, on 'Walls Of Wonder' there are still echoes from those aforementioned EP's in the form of remixes of 'Vikpomé' and 'Tsomé', and a live version of 'E.I.A. (Emergency In Africa)' recorded at Pianofabriek in Brussels. What's left: seven new tracks including 'Remember Masekela', an ode to the South-African trumpet legend who passed away last year, jazzy title track 'Walls Of Wonder' (with a chorus featuring the voice of Daniel's son Elinam), 'Afro Dream' (with guitar and percussion by Oghene Kologbo), a literal reference to the afro-hair style as a powerful symbol, which, replaced by an afro wig, suddenly becomes worthless, but at the same time a song meant to clarify that the African dream does not equal the American one, and 'Ewe Blue', an instrumental tribute to his people, the Ewe, an ethnic group in Ghana, Benin and Togo. Excellent long-player in which the fusion of jazz and afrobeat, Dzidzonu's trademark, comes into its own!