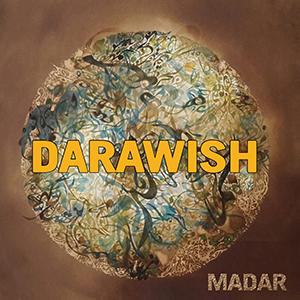 Darawish is a five-piece Spanish band from Madrid, consisting of band members with a varied cultural background (Syrian oed player Hames Bitar, Iranian ney, flute and tombak player and vocalist Kaveh Sarvarian, and Spanish musicians Pablo Hernandez - saxophone, Luis Taberna - percussion and Fernando Leria - bass). In addition, Syrian vocalist Linda Al Ahmad adds a feminine touch in 'Huzam II (Shargawi)' and the goosebumps-worthy closing track 'Ya Weil', and you'll hear the voice of Tunisian Larbi Sassi in 'El Rai De Bouazizi'. Darawish is Arabic for "dervish", Islamic Sufi clergy who take the vow of poverty. There are several religious orders or tariqas, but the best known one is undoubtedly the Mevlevi order, or Mevleviye, also called the spinning dervishes, because their Sama ceremony consists of performing a whirling dance in order to reach religious ecstasy called majdhb or fana. The sound of Darawish is a wonderfully enchanting mix of Arab influences - from the Arab maqam and huzam, over raï to Persian segah - with western jazz. With their music the band claims they want to immerse themselves in the reality in which we live and the tireless and endless whirlwind that it is. Immediately a good explanation for the title of this long-player debut, as 'Madar' is Arabic for "circulation" or "orbit", and a nice link with the name of the band.