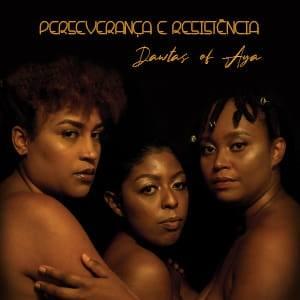 Dawtas Of Aya is a Brazilian women's trio consisting of dub poet Carol Afreekana, singer Regiane Cordeiro and singjay Sistah Mari; three strong black women who saturate their songs with a powerful pan-African lyricism. The project gained momentum after a chance encounter with sound system operator and producer Kibir La Amlak, who saw and heard the ladies at the Tawai Dub Festival in São Paulo. This resulted in the collaboration project 'Energia', released in 2018, now followed by this 'Perseverança E Resistência'. The Aya from the band's name is a so-called adinkra, symbols representing concepts and aphorisms often used on fabrics and pottery, but in the case of the Ashanti in Ghana and the Baule in Ivory Coast also used on walls and other architectural elements. In this case it's a fern symbolizing perseverance and endurance, not coincidentally the translation of 'Perseverança E Resistência', the title of this album for which the ladies joined forces with Steve Vibronics, who provided the riddims for the tracks. Joined by a live band, the trio retreated to a studio in São Paulo, before finally returning the recordings to Steve for the final mix at his Vibronics Dub Cupboard Studio in Leicester. 'Perseverança E Resistência' opens with 'Salve Zumbi', a poem dedicated to Ganga Zumba, the sixteenth century leader of the Quilombo of Palmares, the most important of a series of fortified villages founded by fugitive slaves. A fascinating and inspiring history for which you will need a solid knowledge of Portuguese. In the rest of the 10 tracks on 'Perseverança E Resistência', the ladies pay tribute to the mother continent of Africa ('Origem'), the power of the black woman ('Deusa Preta', focusing on Brazilian heroines like quilombo leader Teresa de Benguela, quilombo queen Mariana Crioula and Esperança Garcia, the first female slave in Brazil who dared to denounce her degrading existence by sending a letter to governor Gonçalo Pereira Botelho de Castro), in 'Segregação' ('segregation') Dawtas Of Aya denounce the ubiquitous racism still rampant in Brazil and the rest of the world, and 'Emi Fe E' (Yoruba for "I love you"), is an ode to the Yoruba traditions their ancestors, forcibly taken to Brazil as slaves, brought with them. A number of songs on the album also feature vocal guests: for 'Deusa Preta' for example, the ladies were joined by fellow townsman Denise D'Paula, and we also get to hear some male voices thanks to contributions by Natan Nascimento in 'Mundo Novo' and Emcee Lê in 'Becos Da Vida'. Steve Vibronics concludes in style with heavy dubs of title track 'Perseverança E Resistência' and 'Origem'. Excellent album by an impressive Brazilian women's trio we'd like to see on a stage in Europe as soon as possible!