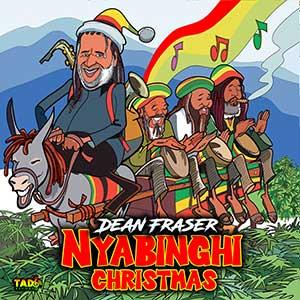 If, despite everything, you're still in search of some Christmas spirit, look no further because saxophone veteran Dean Fraser is ready to treat you to a 'Nyabinghi Christmas'.

Dean Fraser: "When this pandemic hit, we just came off the road touring with Tarrus Riley. I quickly realized that based on how this thing was looking I would have some down time so I just said we're going into the studio. Out of that came Tarrus' album 'The Healing' and then Tad's (veteran producer Tad Dawkins) just say come let's do some work, and this album came into being.".

For 'Nyabinghi Christmas' Fraser recorded 16 popular classics ('I Wish You A Merry Christmas', 'Deck The Halls', 'Feliz Navidad', closing track 'Auld Lang Syne', in fact an eighteenth century Scottish poem by Robert Burns that's mainly played during Scottish New Year or Hogmanay, and 'Long Time Ago', also known as 'Mary's Boy Child', originally recorded by Harry Belafonte, but in 1978 also a big hit for Boney M) and a few lesser known Christmas songs, and gave them a in an nyahbinghi adaptation, always with his own saxophone in a leading role: "It was not going to be just some Christmas songs. I wanted to do something that created a direct Jamaican feel and vibe and we all can relate to. So I draw for Nyahbinghi drumming. So, it won't be that white Christmas kinda vibe when we get together for the holiday just some really nice talk-over music... all Jamaican sound. It's a fulsome palate. There is something on this album for everyone, and it's all the music that I have loved since mi a yute!".

Apart from Fraser himself, the album also features percussionists Congo Billy and Hector Lewis, bassist Mikey Fletcher, guitarists Dario Morgan and Lamont Savory, keyboardist Andrew Marsh and flautist Zoe Mcintyre. However, a special mention should go to Denver 'Feluke' Smith, the Jamaican artist who lost his battle with cancer in September of this doomsday year, who, together with Dean, came up with this project, and on 'Nyabinghi Christmas' is featured as a percussionist.

On what has to be the most cheerful cover of 2020 - a cartoon design by Clovis Brown Mark - we finally see Dean, sitting on a dreadlocked donkey (a nod to the song 'Little Donkey' included in the track list) like a Rastafari Father Christmas, pulling a cart carrying percussionists Congo Billy, Hector Lewis and Denver 'Feluke' Smith, all stirring their nyahbinghi drums.

For what it's worth: Dean Fraser and yours truly still wish you all a Merry Christmas!