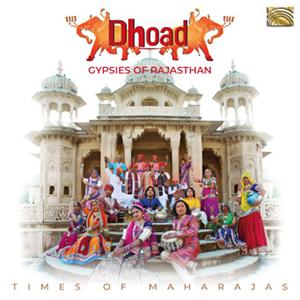 Dhoad is a colorful gypsy band from the state of Rajasthan in north-western India bordering Pakistan, named after the maharajas (translated from Sanskrit: "great rulers") who ruled there for centuries (see also the title of this album). Bandleader and tabla player Rahis Bharti inherited his musical heritage from his father Ustad Rafeek, who in turn learned the trade from his grandfather Ustad Rasool Buxkhan, with the whole music tradition stretching back seven generations, when the ancestors of Rahis and his brothers Teepu Khan (tabla and vocals), Sanjay Khan (lead vocals and harmonium) and Amrat Hussain (tabla) made a living by entertaining the court on festive occasions like births, weddings and religious ceremonies. In the track list you can hear echoes from that history in the form of 'Sona Ra Button Banna', in which the birth of a prince is celebrated, 'Dhanra Saheba Ji', about the arrival of a bridal procession, or 'Janwariyo (Romantic Peacock)', in which the peacock stands for the arrival of the rainy season, a symbol of wealth, as well as symbolizing a returned lover. Sometimes this sounds upbeat ('Breathing Under The Water', 'Janwariyo/Romantic Peacock', closing track 'Begha Ghara Ayo/Maharani Longing For Maharaja') and elsewhere mesmerizing ('Dhanra Saheba Ji/Dream Wedding', 'Lullaby', 'Nagar Bêle/Never Let You Go'...). Indian musical world heritage!