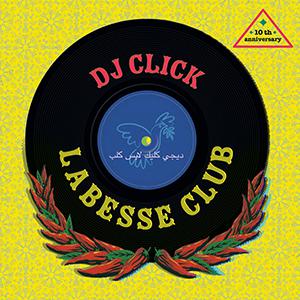 With 'Labesse Club', French producer DJ Click (Benjamin Martin) celebrates the tenth anniversary of 'Labesse', Click's first solo album from 2006, featuring 17 new songs (and two bonus tracks) for which he collaborated with The Alaev Family, Watcha Clan, Sofiane Saidi, Simo Bouamar, Yasmine Djel, Guy Shalom and many others. Both the title of the original 2006 album and this 'Labesse Club' are a reference to the Arabic term "labas" which translates as: "All right!", as well as to the Place des Abbesses near Montmartre and the multicultural neighborhood around the Boulevard Barbès in Paris, a location where you can always see street musicians at work. The mix of oriental rhythms with western electronics still sounds as infectious today as it did ten years ago, and 'Labesse Club' will definitely guarantee a solid party.