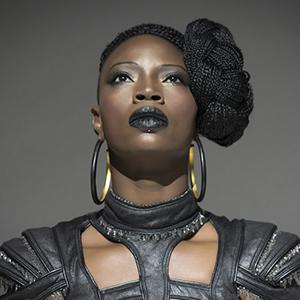 It took no less thanfour years, for Ivorian singer Dobet Gnahoré to complete her new album 'Miziki' ('music'). This release also meant her farewell to Contre Jour, the Belgian label that until now had been her home base. Dobet is crazy about African artists like Yemi Alade, Miriam Makeba or Brenda Fassie, but is almost just as passionate about the western sound of Björk or Christine and the Queens. To reflect this duality on 'Miziki', for this album Gnahoré collaborated with French producer Nicolas Repac, who in the past also already worked on Malian singer Mamani Keita's repertoire. Whereas Dobet's previous albums were a vocal patchwork of languages like Mandinka, Dida, Haitian Creole, Lingala and Bete, for 'Miziki' she mainly focused on her mother tongue, Bete, supplemented with the odd sentence in French or English ('Éducation'). In title track 'Miziki', immediately the most energetic track on what is mostly an easy listening album, the Ivorian sings about her passion for music, with 'Africa', the only song on 'Miziki' that was not written by Dobet herself, but by Josiane de Ridder, the singer does the same for the African continent, and in 'Akissi La Rebelle', she describes her own rebellious side. Dobet Gnahoré was already #Metoo, before the hashtag became a household name, and on 'Miziki' she once again speaks up for women's rights. In 'Lobé' she describes the fate of a disabled woman, who, against all expectations, continues to fight and eventually sees her dreams realized (a song involuntarily reminding us of Belgian wheelchair athlete Marieke Vervoort), with 'Détenon', in which hope is put at the center as the driving force towards a better future, as a perfect sequel. But on 'Miziki', Dobet also provides us with a glimpse into her own emotional life. 'Love' is about the importance of loving and being loved, and 'La Clé' tells the story of a broken relationship and the emergence of new feelings for another. 'Miziki' is yet another convincing album by one of the female mainstays in African music.