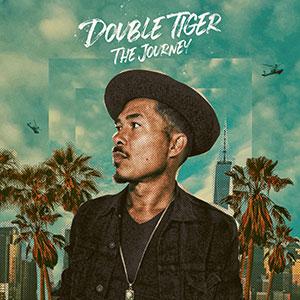 We still vividly remember 'Sharp & Ready', Jay Spaker aka Double Tiger's 2017 solo debut, as one of the absolute revelations of that year. However, in the meantime a lot has changed in Double Tiger's life and this aptly titled 'The Journey' sounds remarkably different from its predecessor.

Spaker spent pretty much his entire life in New York, where he set up the Dub Stuy Records label and was active with Tour De Force and as guitarist in John Brown's Body, but after the latter band decided to go on an indefinite hiatus, Double Tiger decided to move to Los Angeles.

The reggae styles on the American east and west coast are now so different that a comparison with the split that existed between West Coast and East Coast hip-hop is certainly not that farfetched: "This album is a blend of the many styles of reggae that inspire me. The previous one was straight rub-a-dub focused. When I got to L.A., I was in a more open place and started exploring other aspects I had always loved - like lovers rock and rockers - but never really messed with in my own writing.".

In the process of finishing the album, Jay suddenly had to fly back to Ithaca, New York, to take care of his father, who by had fallen gravely ill and passed away in August of this year. Add to that the whole COVID-19 situation and you can imagine that 2020 wasn't immediately Double Tiger's year. Despite everything, Jay remained quite down-to-earth about things: "I am very privileged to make music and believe in its power to heal and bring folks together. This last year has been powerfully transformative with my father's passing, COVID-19, etcetera. Having this album finally out in the World is a blessing and I would like to dedicate this one to pops!".

The track list of 'The Journey' features a very varied guestlist. Elliot Martin, Tiger's band mate in John Brown's Body, can be heard in opener 'Criminal', New Kingston's Suckarie shares the microphone with Double Tiger for the P-funky 'Rub A Dub Party', Spaker invited Columbia, South Carolina-based The Movement for 'Shadow Dweller', West Coasters like Slightly Stoopid from Ocean Beach ('Drop Sound') and Karim Israel of Arise Roots from L.A. ('Universal Love') make an appearance, but the biggest surprise has to be veteran toaster Ranking Joe who joined forces with Double Tiger for both 'Lovers Rock' and the more militant 'Situation Critical'.

Our personal favorites from 'The Journey' can all be found in the second half of the track list: 'Shadow Dweller', the combination tune with The Movement, 'Situation Critical', an excellent duet with Ranking Joe about the omnipotence of the "the one percenters", 'Universal Love' featuring Karim Israel, which in a way offers a response to the previous song, the very enjoyable instrumental interlude 'Smoke Break', and finally solid closing track 'Situation Dub'.

Yours truly isn't the biggest fan of the slightly more commercial sounding American West Coast reggae, and hence 'The Journey' didn’t quite hold the appeal its predecessor had, but don't let that judgment stop you from joining Double Tiger on this musical journey!