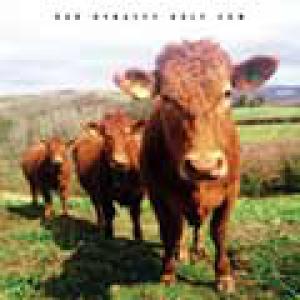 With 'Holy Cow', Dub Dynasty, the collaborative project of John Sprosen and Christine Woodbridge of Alpha & Omega and John's son Ben aka Alpha Steppa, is already at its third long player. Of course, a title like 'Holy Cow' immediately brings to mind Hinduism, where the cow is considered as "the mother of all creatures", but, as Ben explains, that is only part of the story: "One of the aims of our music is to comment on and bring attention to the devastating effects of modern agro farming, including live stock. Not just the maltreatment of the animals but the unsustainable treatment of the Earth, with, as you know, extremely dangerous consequences for not just our home and species diversity but for our own species too. Our thinking is, if we do not treat the planet and nature with respect, how can we even begin to fathom the concept of humanity. The cow seemed like a perfect symbol, considering the huge impact of beef rearing at present. They also play a big role in many ancient cultures and religions: the sacred cow within Hinduism, consider the story of the Golden Calf and the Israelites and even the cow headed god Hathor of the ancient Egyptians.". If the title of this album already reminded us somewhat of India, then 'I Am Dub', an instrumental in which a sitar plays a leading role, certainly does. For the vocal parts on 'Holy Cow' Dub Dynasty once again called on a host of dub scene regulars: there's Cologne (sometimes also Singing Cologne), a singjay from Linstead in Jamaica, Birmingham-based Sista Jane Warriah, known for her work with Italian sound system Roots Reality Hi-Fi, Irish MC Ras Tinny and our very own Kiangana even pops up twice ('Oh Father' and 'Seek Freedom')! Our personal favorite is Jamaican singjay Iyano Iyanti, whose voice can be heard in 'Chase Babylon', without a doubt the most solid stepper on 'Holy Cow'. Ethical dub vibes!